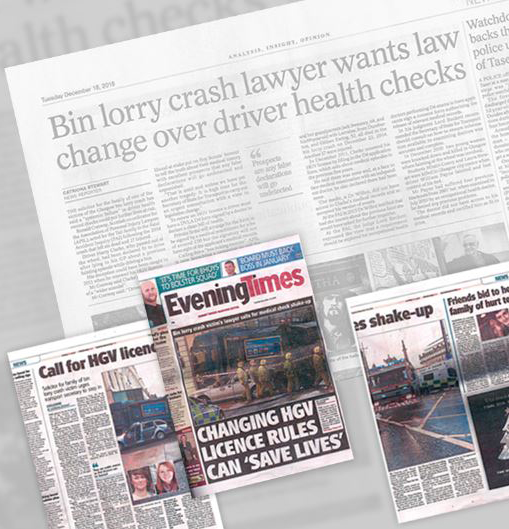 The George Square bin lorry tragedy took place on 21 December 2014.  Six persons were killed.  The pursuers were relatives of one of the deceased.

In October 2017, GCC agreed that their claims would be settled.  The pursuers were invited to raise proceedings which would then be sisted for settlement.  A decree would have to be taken as GCC wished to exercise a right of relief against an unnamed third party.

The summons was lodged with the General Department on 11 December 2017, but by reason of procedural oversight, was not lodged timeously for calling.  The instance fell, leaving the claim prima facie time barred.

At first instance, the Lord Ordinary held that this was “a serious and culpable failure” and that an alternative remedy against the Edinburgh agent was likely to succeed.  On the other hand, there would be material prejudice to the pursuers.  They would require to instruct other agents, and there was evidence that the delay and distress would cause a detrimental effect on their mental health.  There was no defence to the action.  The Lord Ordinary held that it was equitable that the case should proceed against GCC under Section 19A.

The defenders reclaimed.  Their exposure to damages was estimated at between £400,000.00 to £2m pounds.  The Inner House refused the appeal.  The delay and mental distress to the claimants were relevant considerations.  Whilst there was no doubt a prima facie case of professional negligence against at least the Edinburgh agents, it was arguable that there were some imponderables.  The availability of the alternative remedy was only one factor. The Lord Ordinary had not taken into consideration any irrelevant matter and was entitled to reach his conclusion.

A year or so earlier in Jacobsen -v- Chaturvedi [2017] CSIH 8, the Inner House had upheld a first instance decision to refuse a Section 19A application.  They stated, “the stronger a pursuer’s case against the solicitor, the more likely it is that the court will refuse the application”.  Certainly, in the writer’s experience, that is the default position, and the recent case represents a significant deviation.  No doubt that the defenders will wish to restrict its ambit to the special facts.  But in England, in Cain -v- Francis [2009] WLR 551,  Lady Janet Smith has held that the availability of an alternative remedy is irrelevant and that the principal consideration for the court should be forensic prejudice i.e. can a fair trial take place?

In Scotland, we still await the implementation of the Law Commission’s report on Limitation in Personal Injury Actions which has lain on the stocks since 2007.  It is high time it became law.  The current position on 19A is so inchoate as to defy analysis, leaving it impossible for agents to predict the result in any particular case.